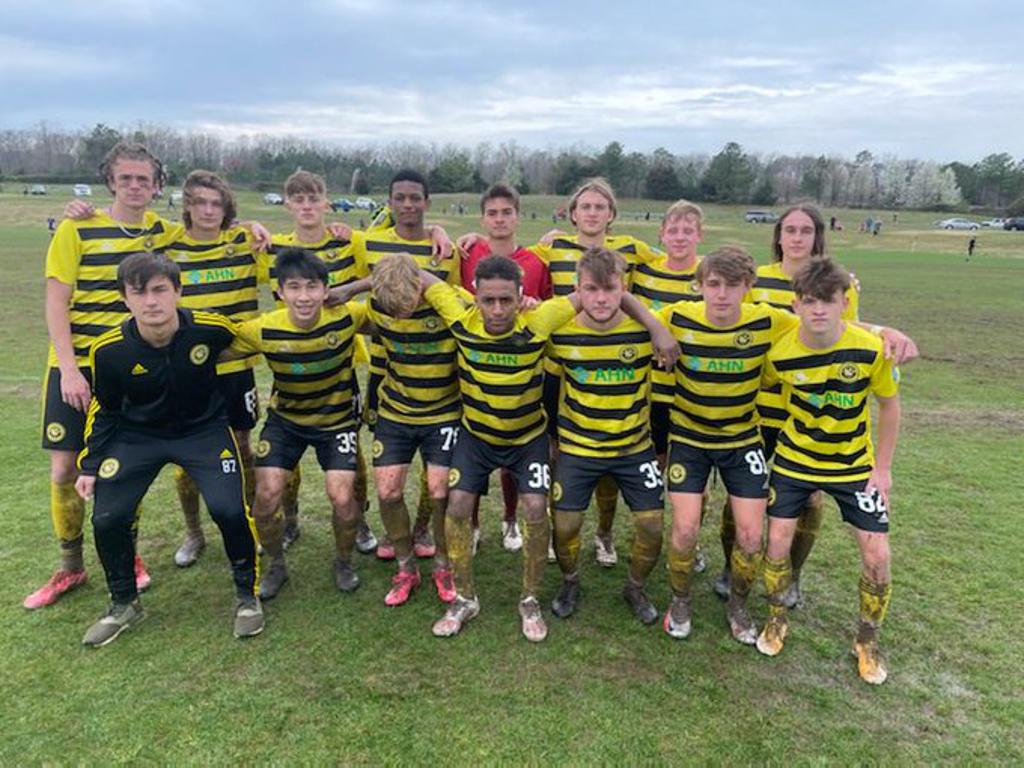 No, the 2002/03 Boys didn't just play a rugby match, but their mud-covered effort Sunday completed at 3-0-0 weekend at the Jefferson Cup in Richmond, Va.

Rain and storms couldn’t put a damper on a big final weekend of March for the Riverhounds Development Academy, which picked up big results at home and in Virginia.

Three Hounds sides made the trip to Richmond, Va. for the final weekend of Jefferson Cup play, and two of those, the 2002/03 Boys and the 05 Boys, ran the table in their group.

For the 05s, Alex Hauskrecht is on quite the scoring tear, as he scored in all three games to run his personal streak to nine consecutive games with a goal. Each of his four total goals on was needed, as the team squeaked out a 2-0 win over Maryland United and a 2-1 win over the Richmond Kickers before ending with a comfortable, weather-shortened 3-0 win over Nirvana 360 Boca (N.Y.).

The 02/03 Boys also were tested after a relatively easy 7-1 win to open the weekend. Gabe Norris and Ryan Edwards scored to beat a high-quality Richmond Magic team, 2-1, and Sam Farner and Lucas Hammerle got the goals for a 2-1 win over Charlotte SA (N.C.) in a mud-covered finale.

The third team to travel, the 02/03 RDA II Boys, played three matches each settled by a single goal. The team finished 1-2-0 with the win coming 1-0 via a Connor Oechslin penalty kick against Maryland United.

Back at Highmark Stadium, driving rain also hit Sunday, the second day of a Girls ECNL homestead for the Hounds. The 04 and 05 Girls were the big winners, each getting six points against the visiting sides from Indiana.

For the 04s, it was a defensively dominant weekend with a 1-0 win over the Indiana Fire and a 2-0 win over FC Pride. Natalie Matthews, Aleena Ulke and Gwen Howell anchored the line for the RDA, while Matthews posted an assist in each game and Ulke scored the second goal Sunday from a corner kick.

While it was defense fueling those wins, the 05 Girls were racking up goals in a 6-1 win over the Indiana Fire. Alexis Tylenda had a hat trick, while Lucia Wells, Lola Abraham and Ava Boyd also scored. The next day was a 3-0 win over FC Price, in which Fiona Mahan netted a pair of goals, and Minah Syam completed the scoring.

Plenty of other teams picked up nice wins on the weekend. The 02/03 Girls knocked off FC Pride, 3-2; the 08 East Boys and 08 East Girls each swept two matches against Great Lakes Alliance opponents, and the 04 East Boys, 07 East Boys and 07 RDA II Boys all picked up wins, as well.

For a complete rundown of those wins and the rest of the weekend’s matches, visit the Live Results page on Riverhounds.com found HERE.