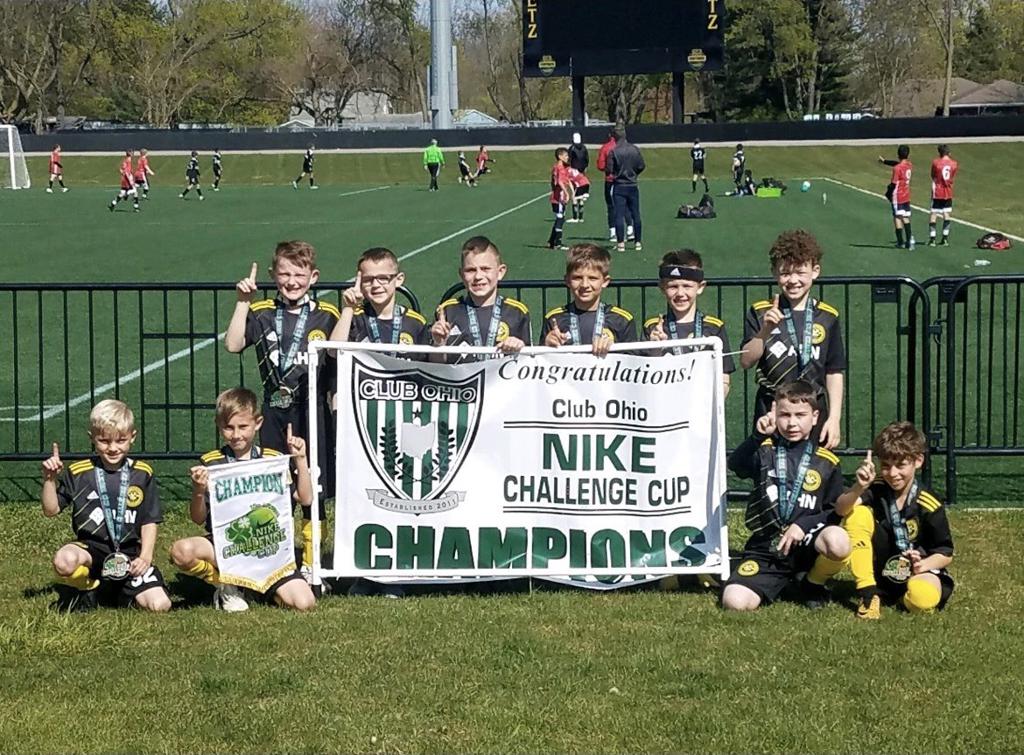 The 2012 East Boys took care of business with a 3-0-1 record at the Club Ohio Nike Challenge Cup, which included a 2-1 win in the championship game over Hotspurs North (Pa.).

Two more trophies came home last weekend from the boys’ weekend of the Club Ohio Nike Challenge Cup, as the Riverhounds Development Academy continued its busy spring at the tournament and hosting two more days of ECNL matches on both the boys and girls side.

The 2012 East Boys, the youngest of the teams to travel, battled through some tough matches to win their championship game 2-1 over another Pa. side, Hotspurs North. The team scraped through their group with a 2-2 draw against Canton United earlier Sunday after wins of 5-3 and 7-1 in Saturday’s play. Caden Holland, Ridge Brunton and Nick Bosnic were among those with good weekends in a trophy-winning performance.

The 10 East Boys had an easier time of it claiming their division, beating Westerville United (Ohio) in the final, 4-0. That final was their closest match of the weekend, as they outscored their opponents 33-2 over the course of four matches.

Apart from those two sides, the RDA had a series of near-misses in championship matches, none closer than the 02/03 RDA II Boys falling 3-2 on penalty kicks to nearby Century United. Jacob Gardner tied the game with a headed goal, as the teams finished regulation and extra time tied 1-1.

The 08 RDA II Boys, 08 East Boys, 09 RDA II Boys and 10 Boys also reached the final of their respective divisions for a total of seven Hounds sides in championship games.

Back home, league play was in full swing for the ECNL sides, and the 05 Girls continued their impressive run to 13 matches without a defeat.

The 05s won 2-0 over Internationals SC behind two Lola Abraham goals, and they battled to a 1-1 draw with Ohio Premier with Fiona Mahan getting the Hounds’ strike. The results keep the Hounds in the top three in the Ohio Valley Conference, which puts them in position to claim an ECNL Champions League berth.

The 04 Girls did come out with a win over Ohio Premier, 1-0, on a Londynn Gonzalez goal, while the 02/03 Girls fell 3-2 in a wild finish, as Ohio Premier’s goalkeeper scored from a corner kick late in stoppage time.

On the boys side, Saturday was a productive one in matches against Pacesetter SC (Ohio), with wins by the 02/03, 04 and 05 sides, all of which recorded clean sheets on the Highmark turf.

For more from a busy weekend with more than 70 matches played, visit the Live Results page.