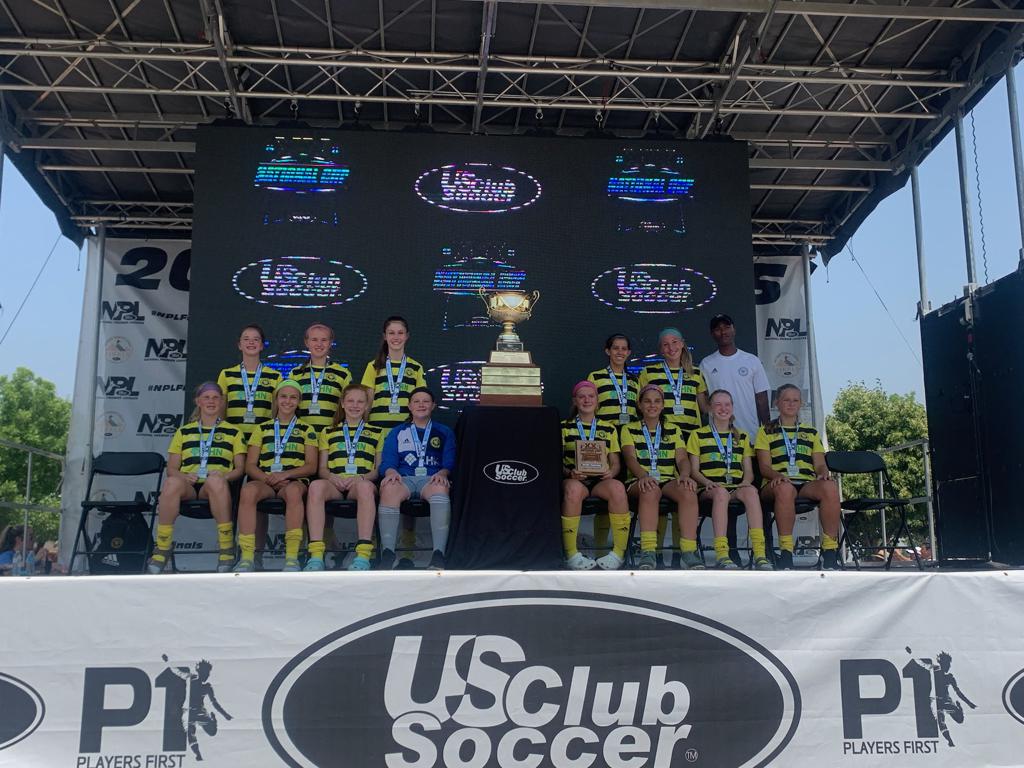 The 2006 East Girls receive their silver medals after a runner-up finish in the Premier Divison at the US Club Soccer National Cup XX in Commerce City, Colo.

The Riverhounds Development Academy’s 2006 ECNL Girls and 2006 East Girls brought the 2020-21 tournament season to a close last weekend, as both competed at the US Club Soccer National Cup XX at Dick’s Sporting Goods Park in Commerce City, Colo.

The weekend started well for the 06 East Girls, playing in the Premier Division at the National Cup. A 3-0 win over Amarillo Rush (Texas) and a 4-0 win over Real Colorado secured a spot in the final before the side even played their final group game, a 4-2 loss to Houstonians FC (Texas).

That set up a championship game against South Dakota United, in which the Hounds battled but came up short, 4-1.

Ava Kovscek scored in the final — her fourth goal of the weekend — to cut the lead to 2-1, and goalkeeper Danielle Dominick was outstanding to keep the Hounds close, but the South Dakota side maintained the upper hand. Ava Yurko also was excellent in the final, playing through an injury suffered Sunday to compete in the Tuesday morning title game.

The 06 ECNL Girls side took part in the Super Group, the top division at the National Cup, and things got off to a rocky start with a 3-0 loss to Pacesetter SC (Ohio).

The next day saw the team play a wild 4-4 draw with New England FC. After controlling early play, the Hounds found themselves trailing 2-0, but Jadyn Coy and Kristi Gorman pulled the score level. Addy Lacey equalized again to make it 3-3, and Ally Ruiz seemed to have a winner with two minutes remaining, only for New England to get a late, tying goal.

That proved costly, as the Hounds won their last group game over South Lakes SC (Okla.), 2-0, with goals by Natalie Figura and Ruiz. Though the team finished second in their group with four points, they missed a wildcard spot in the knockout round on goal difference.

Now that national tournaments have concluded, the RDA’s 2020-21 season has one match remaining this Sunday, a 3 p.m. USL Academy League home match against Cleveland Force.