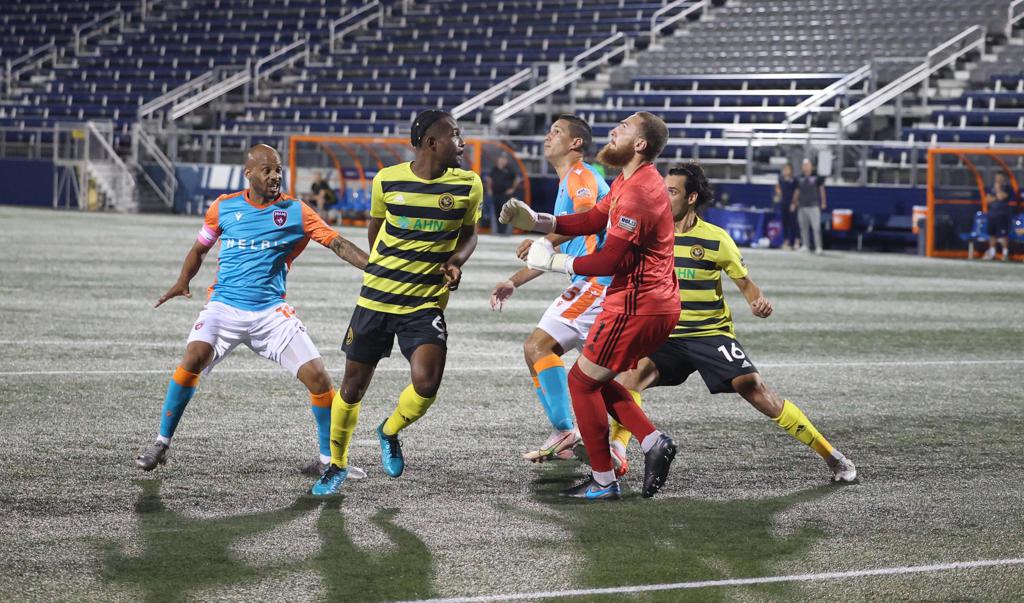 (October 27, 2021) — Pittsburgh Riverhounds SC was able to claim a 1-0 win over Miami FC at Riccardo Silva Stadium on Wednesday night, as the two teams completed the league-ordered replay of their Oct. 16 match.

The replay began in the 67th minute with the Hounds (17-8-6) holding a 1-0 lead by virtue of a Janos Löbe own goal scored in the original match. That goal was incorrectly disallowed and a corner kick awarded instead, leading the USL Championship to stage the replay because of a misapplication of the Laws of the Game.

Miami (15-10-6) came out firing in an effort to level the match, holding 62.2 percent of possession in the second half and sending multiple dangerous crosses into the box. Danny Vitiello was strong in the air to corral most of Miami’s high entry passes, and he completed what will go down as his eighth shutout of the season without making an official save in the replayed time.

The Hounds had the best scoring chance of the replay in the 80th minute, when Russell Cicerone broke in behind the Miami defense. Miami goalkeeper Connor Sparrow came off his line and fouled Cicerone almost 35 yards from goal, but Sparrow only received a caution as the distance from goal and Cicerone’s touch leading him toward the corner flag negated a possible red card for denying an obvious goal-scoring opportunity.

Danny Griffin was excellent playing the holding midfield role in the replay and the original match. He finished with a 74 touches on the ball, had four tackles, won possession 11 times and 45 of 61 completed passes — all team highs.

The race for second in the Atlantic Division comes down to the final day of the regular season. The Hounds host already-eliminated Hartford Athletic, 7 p.m. Saturday at Highmark Stadium, while the Charlotte Independence (18-9-4) travel to face an Austin Bold team that must win to make the playoffs later that night. The Hounds must win and have Charlotte lose or draw to jump into second place and claim a home match in the first round of the USL Championship playoffs.

**Editor's note: Summary information reflects match on Oct. 16 through 66 minutes and replay on Oct. 27 from 67th minute onward. Teams were able to select a new lineup to begin the replay.