The Hounds girls teams took over the D.C. area at tournaments in Bethesda, Md. and McLean, Va. 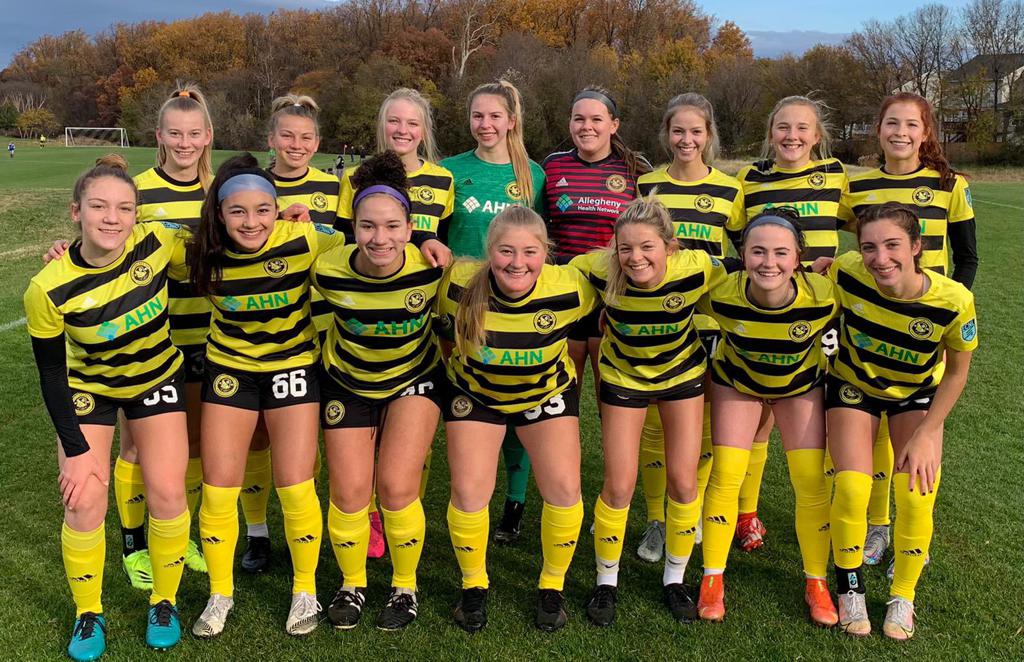 The 2003/04 RDA Girls completed a perfect weekend at the Bethesda Premier Cup by winning all three matches and not allowing a goal in the game played Nov. 12-14.

As high school season winds down, the older age groups of the Riverhounds Development Academy are starting to swing into action for 2021-22.

The first event for many of the RDA’s older sides is the Bethesda Premier Cup, which kicked off last Friday to start the girls weekend of the two-week event in Bethesda, Md., while some of the Hounds’ younger sides and RDA East teams also descended on the D.C. area for the Nation’s Capital Cup in McLean, Va.

In Bethesda, the 2003/04 Girls showed the potential to put together a strong season by sweeping all three of their matches. Fresh off her time at U.S. U-20 Women’s National Team camp, Tessa Dellarose was in form with three goals in three matches — wins over DMV FC, 3-0; hosts Bethesda SC, 2-0; and Loudoun SC, 1-0. Sydney Lindeman and Lily Gaston anchored the back line for the weekend, as goalkeepers Emma Van Meter and Taylor Lloyd allowed no goals over 270 minutes.

In some of the other showcase age groups, the Hounds were a little shorthanded with players still participating with their high school teams in the PIAA tournament, but both the 05 and 06 Girls managed to come away with 1-1-1 weekends.

Among the younger ages, where the tournament had knockout matches and finals, the 07 Girls reached the title game in the top division with a 2-0-1 group stage record before falling 3-1 to fellow ECNL side Loudoun SC. Sierra Dupre scored to tie the game after Rease Solomon saved a penalty kick for the Hounds, but the Virginia side won it with a pair of late goals.

Our Regional League sides also produced some good results, led by the 08 RL Girls, who also reached the final before falling 1-0 to the home team from Bethesda. The team got plenty of good experience from the weekend, as all four of their games was settled by one goal.

Just a short ride to the south across the Potomac, the 08 East Girls captured the championship at the Nation’s Capital Cup by avenging an earlier defeat to fellow Pa. side Century West, 2-0. Jiana Patterson and Siena Ali scored in the final and the earlier Sunday game — a 2-0 win over hosts McLean — as the team finished 3-1-0 and shook off their 3-1 loss to Century West in Saturday’s play.

The 09 East Girls advanced to the semifinals of their division before falling 2-0 to Arlington SC, while the 10 East Girls and the City’s 11 Girls both finished second with 2-1-0 records in their group, but neither advanced to the final with only the first place team moving on.

A more comprehensive run-down of the weekend’s games can always be found on the RDA Results page, which will also be the place to find results from this coming weekend, when both the events in Bethesda and McLean turn to boys action starting Friday.