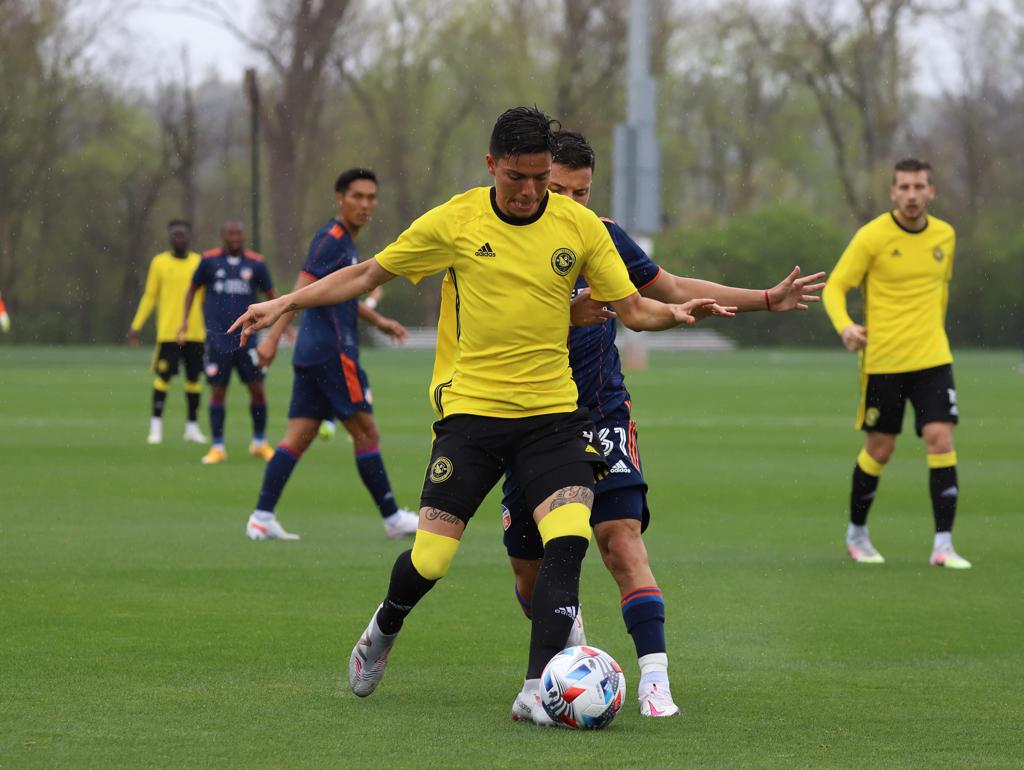 (April 10, 2021) — Pittsburgh Riverhounds SC faced their toughest preseason test yet and came away with a 2-1 road win over MLS club FC Cincinnati in rainy conditions at Mercy Health Training Center in Milford, Ohio.

Danny Griffin scored the game-winning goal with roughly 10 minutes to play, while Albert Dikwa tapped in at the back post for the Hounds’ first goal in a match that was played behind closed doors at the FCC training facility. Calvin Harris scored for FC Cincinnati, and the two teams were knotted 1-1 at the halftime break.

The step up in class was noticeable for the Hounds, who are now midway through their preseason schedule.

“There was a good speed to the game, and it was a big step up for us because of the pace of the game, the speed of the players an MLS team has and the way they’re pinging the ball around,” Riverhounds head coach Bob Lilley said. “They exposed us a number of times, and they were a bit wasteful with their chances. We battled well, but we have to be able to take care of the ball more.”

Dikwa’s goal, the striker’s second of the preseason, was set up on a ball across the front of goal from new Hounds forward Russell Cicerone, who was a Cincinnati player in 2018.

Another new Hounds player, defender Ezra Armstrong, assisted on the goal by Griffin, who was one of the only players to log a full 90 minutes in the match. The starters played into the second half, according to Lilley, who said most played between 55 and 75 minutes.

“We needed a game with the ball zipping around and an opponent who was fast and could hurt us,” Lilley said. “I’m somewhat pleased because we competed hard, made a lot of plays and found two pretty good goals while they could only get one. We were fortunate to get a win, but we knew it would be a game where we were severely tested. For this early in the preseason, we did a lot of good things.”

The Riverhounds go back on the road for their fourth preseason match, Saturday, April 17 at 3 p.m., against Louisville City FC. The game at Louisville’s Lynn Family Stadium will be the Hounds’ first preseason match played with fans in attendance and their first against a USL Championship opponent.