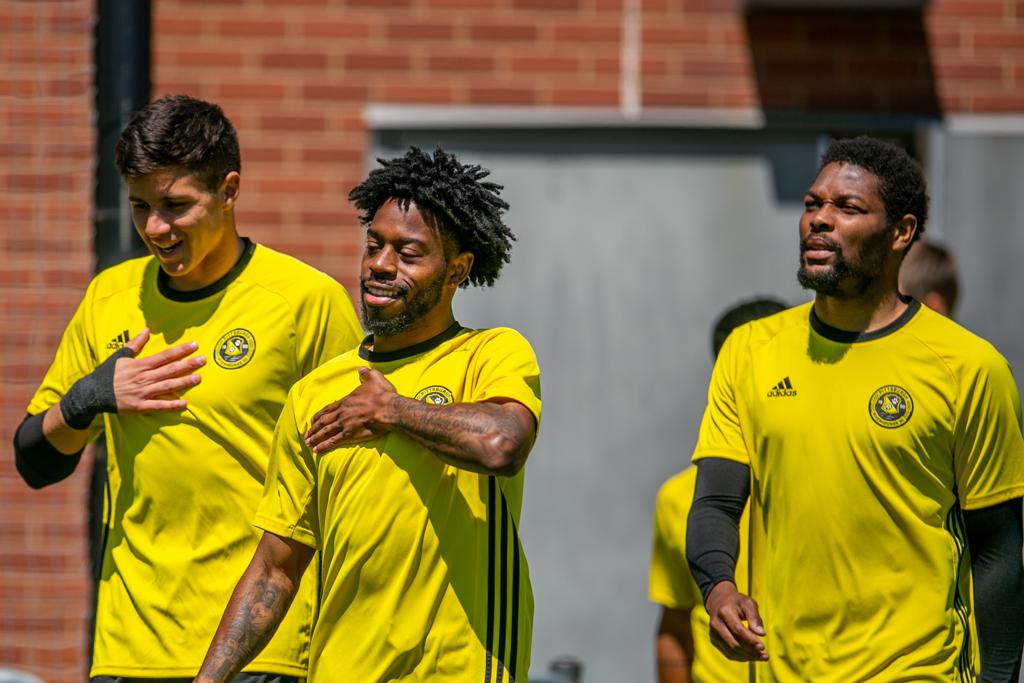 PITTSBURGH (May 1, 2021) — Pittsburgh Riverhounds SC brought its preseason to a high-scoring end, as the team rallied from a two-goal halftime deficit to defeat Philadelphia Union II, 4-2, at Highmark Stadium on Saturday afternoon.

Alex Dixon scored twice, while Tommy Williamson and Albert Dikwa also found the net for the Hounds, who finish the exhibition schedule with a 3-1-2 record. Jack Jasinski and a non-rostered trialist scored the two first-half goals for Philadelphia.

With preseason completed, the Hounds will have a recovery tomorrow and return to training Monday in preparation for their 2021 USL Championship opener, which will be on the road at the reigning Eastern Conference champion Tampa Bay Rowdies. That match at Al Lang Stadium in St. Petersburg, Fla., is a 7:30 p.m. kickoff on Saturday, May 8.

The Hounds began the match looking for goals, having scored just once in their past two preseason matches.

Jordan Dover had the first good look at goal in the 10th minute, after receiving a back-heeled pass from Williamson just inside the penalty area. Williamson seemed to want the ball returned to him in space, but Dover elected to shoot and missed to the right of goal.

Union II started the scoring in the 23rd minute, after the Hounds failed to track back on a second ball into the box after clearing an initial corner kick. Mani Diop sent the ball back toward the goal from the left flank, and the pass fell to the feet of a non-rostered player, who finished from close range.

Jack Jasinski doubled the Philadelphia lead in the 41st minute when the Hounds again struggled to deal with a cross from the left side, this one sent in by Anton Sorenson.

Dixon nearly scored with the final kick of the first half, but his shot from close range didn’t have enough power, and former Hounds goalkeeper Anthony Mwembia dove and scrambled to keep the ball out of the corner of the net.

Dixon got his first goal of the preseason just three minutes into the second half after Anthony Velarde sent a high, diagonal pass from midfield behind the Union defense. The new Hounds striker got a little touch on the bouncing ball as goalkeeper Mwembia charged off his line. Dixon flicked the ball over the goalkeeper to get around him and passed the ball into the unguarded net.

Williamson tied the match in the 57th minute with an excellent free kick that found the top right corner of the net from 20 yards away. It was Williamson’s first preseason goal since joining the Hounds on loan from the San Jose Earthquakes of MLS, and it was set up by an overlapping run by Dover, who was fouled as he cut toward the middle from the right side.

Dixon’s second goal put the Hounds ahead in the 65th minute, as he calmly finished with an open shot from the top of the box after being picked out with a long, low pass from Louis Perez in the left corner.

Dikwa, who came on as a late substitute, ends as the top scorer in preseason for the Hounds after netting his third goal in stoppage time. The striker received the ball about 40 yards from goal, and seeing the goalkeeper well off his goal line, ripped a long, looping shot that found the net.

All 22 Hounds players in uniform were used during the final preseason match, as head coach Bob Lilley will have one week to decide who will be the 18 to travel to Tampa Bay.

* — denotes trialist not under contract