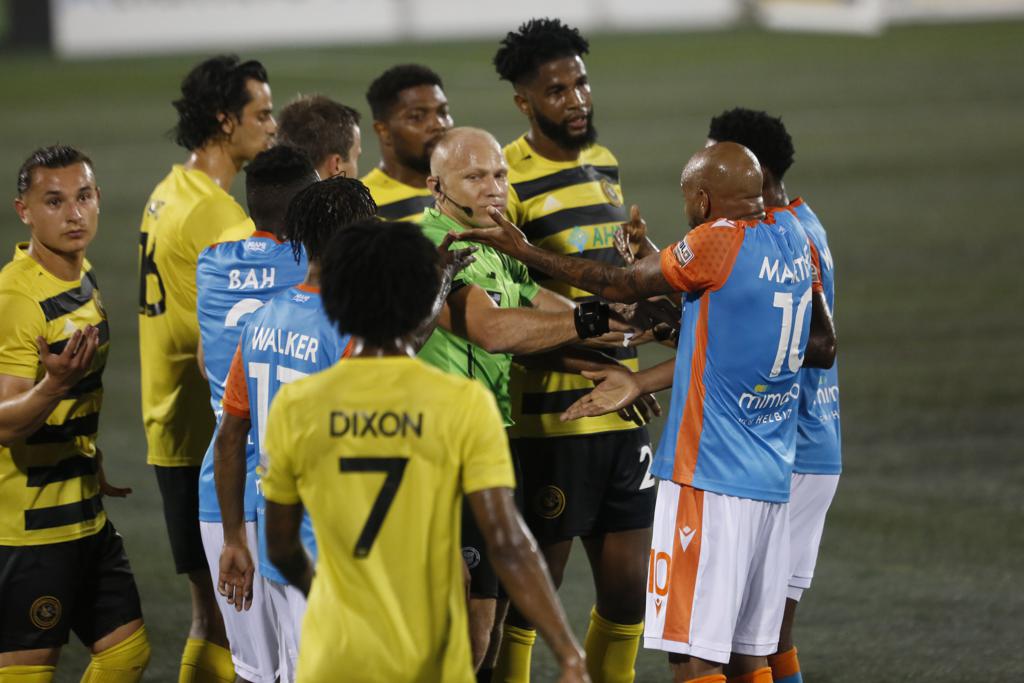 (October 16, 2021) — Pittsburgh Riverhounds SC battled to a 0-0 draw with Miami FC on Saturday night at Riccardo Silva Stadium in Miami, but the bulk of play was overshadowed by an inexplicable officiating decision that denied the Hounds a winning goal.

The decisive moment in the 66th minute came from a Miami free kick that Devon Williams played wide to defender Janos Löbe, who then played it back to goalkeeper Connor Sparrow, who misplayed the ball, allowing an apparent own goal.

After more than three minutes of discussion, however, match referee Jonathan Bilinski gave a corner kick to the Hounds as though the ball was played directly into the Miami goal from the free kick instead of awarding the goal because the ball already had been put into play.

The Hounds limited Miami to just one shot on goal, and that came in the first minute when Ariel Martínez got a half-chance down the left side, but goalkeeper Danny Vitiello cut down the angle well for the only save of his eighth shutout of the season.

The Hounds then began to press forward more, and in the 13th minute, Sparrow made an excellent kick save when Alex Dixon had picked out Russell Cicerone for a chance at the near post.

Those would be the only two shots on goal in the first half, though Cicerone nearly pounced on a misplayed ball by the Miami defense, but his reflexes weren’t quick enough to turn the surprising chance on net.

The Hounds created more chances in the second half, finishing the game with an 8-4 edge in shots and a 5-1 edge in shots on goal, despite having just 42 percent of possession. The team also did a much better job handling Miami’s dangerous, fast attack of Martínez, Lamar Walker and former Hound Christiano François, keeping them off the board after allowing seven goals in three previous meetings.

Apart from the 66th minute controversy, the Hounds still had chances to win, as neither Kenardo Forbes nor substitute Albert Dikwa could get a clean shot away with the ball bouncing just 7 yards from goal in the 85th minute.

Two minutes later, Forbes picked out Dixon for a point-black shot, but Sparrow made the biggest play of the game by zipping across his goal from left to right and blocking the hard shot with his body.

Kenardo Forbes and Danny Griffin share today’s honor. Forbes was his usual threat going forward, leading or sharing the team lead with three key passes, seven total crosses and four connected crosses, part of a 38-for-49 (77.6 percent) passing day. Griffin was even better on the ball, going 49-for-60 (81.7 percent) on his passes and leading the team with five tackles and gaining possession 11 times.

The playoff-bound Hounds play their final two regular-season matches at home at Highmark Stadium, the first of which is 7 p.m. Saturday, Oct. 23, against the Charleston Battery, who were eliminated from playoff contention earlier Saturday. The Hounds will need at least one and likely two wins, depending on other results, if they are to finish second in the Atlantic.