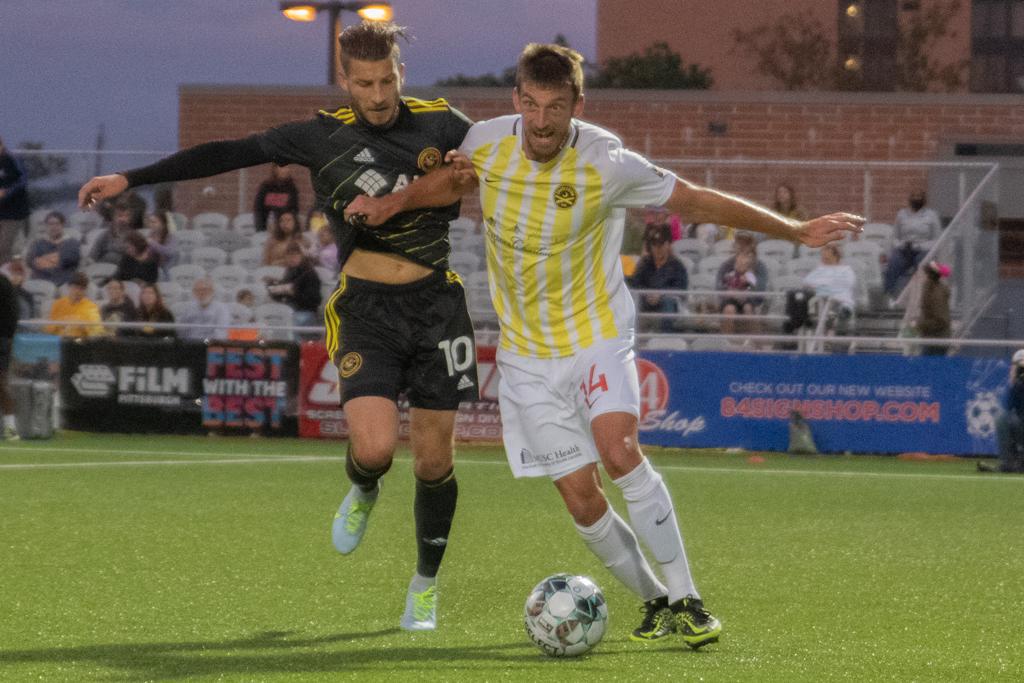 It’s not quite do-or-die. More like do-or-pack your luggage.

The Hounds end their regular season with a two-game homestead, and it’s very likely that only two wins will secure second place in the Atlantic Division and a home game in the first round of the USL Championships. In fact, that might not even be enough.

Still, with no control over whether or not Charlotte drops points over its final three matches, the Hounds can only focus on themselves heading into their 7 p.m. Saturday match against the Charleston Battery knowing they can’t be eliminated from home-field contention before the match.

So with another chance to hold serve on the friendly turf of Highmark Stadium, here are the 3 Things to look for Saturday.

It’s a rarity, but the Battery will be absent from the USL playoffs for the first time since 2007 and only the fourth time in their 29-year history.

That begs the question, how will the Battery react with nothing tangible to play for?

Odds are the Battery won’t lay down, especially after the last meeting — a 3-3 draw Sept. 25 in Pittsburgh — got a little chippy toward the end. More likely would be a situation where Battery coach Mike Anhaeuser elects to rotate in some of his younger or lesser-used players, so while experience might take a dip, the effort almost certainly won’t.

The Hounds might get a glimpse of what a playing-out-the-string Battery side looks like on Wednesday night, as the Battery host the Los Angeles Galaxy II in a game with plenty of meaning for the Pacific Division’s fourth-place side as they try to clinch a playoff spot.

The Hounds just did something they had yet to do all season, shutting out consecutive opponents, and they did so against two of the more dynamic attacks in the division — Tampa Bay and Miami.

If the defense truly is turning the corner after nearly five months of up-and-down performances, it makes the Hounds a very different team than the one they were in July or August. The Battery will be a good test of that, as they have scored six goals in the teams’ three previous meetings this season and have been especially potent on set pieces.

The Hounds’ past two shutouts have come with the team using four players in the back rather than the five across — three central defenders and two wing backs — used earlier in the season.

Against Tampa Bay, it was the bigger combination of Mekeil Williams and Jelani Peters in the middle, with Shane Wiedt on the right and Preston Kilwien on the left. To counter a speedier Miami side, Jordan Dover entered the mix on the right side, while Wiedt tucked into the middle and Peters shifted to the left, dropping a left-footer from the lineup in Kilwien.

The personnel group might shift again, but if Bob Lilley thinks he has found a shape that works, expect him to ride the four-man back line into the playoffs, as the time for further tinkering is running out.

It didn’t seem like it would be at the start of the season, with consecutive 1-0 losses to Charlotte and Austin to begin the Hounds’ home schedule, but Highmark Stadium is again one of the toughest places to play for opponents.

The Hounds are 4-0-2 in their last six home games and 8-1-2 in the last 11, a run that ranks near the best in the club’s history. More noticeably, the offense has flowed on their tight, quick track, with 15 goals in the past five home matches since the 0-0 draw with Tampa Bay.

The team also has scored first in all five of those home games since the Tampa Bay draw, and seven of those 15 strikes have come in the 32nd minute or earlier.

The moral of the story? Get to your seats early. And if you still need your tickets, get them here.