Hounds keep pace in division with 2-1 win over Charleston 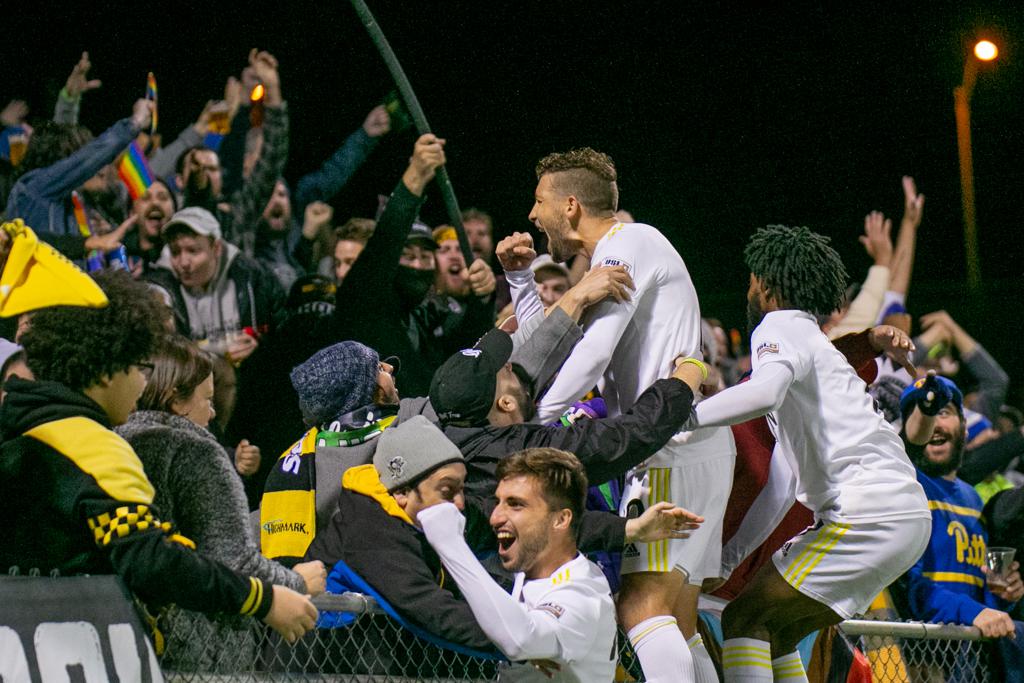 PITTSBURGH (Oct. 23, 2021) — Pittsburgh Riverhounds SC kept alive their hopes for a home playoff game in the first round of the USL Championship playoffs with a 2-1 win over the Charleston Battery tonight at Highmark Stadium.

With the win, the Hounds remain a point behind the Charlotte Independence (17-9-4) for second place in the Atlantic Division and home field to begin the playoffs in two weeks. Each team has two games remaining.

The Hounds were strong on the ball with 57 percent of possession in the first half, and they also had the most early scoring chances. Jelani Peters’ header forced a leaping save by Battery goalie Joe Kuzminsky after just 17 minutes, as the Hounds signaled their intent.

Wharton then struck the post with a shot from the middle of the box, but Cicerone tracked down the rebound and fed the ball back to Wharton, who made no mistake with the second shot. It was Wharton’s fourth goal of the year and the eighth assist for Cicerone, who remains the only player in the top 10 of the USL Championship in both goals and assists.

Charleston got more adventurous after falling behind, and Danny Vitiello needed to make a kick save — one of three saves by Vitiello — in the Hounds goal to prevent Daley from tying the score from a sharp angle on the left before halftime.

Tommy Williamson forced another good save by Kuzminsky from a free kick after halftime, curling a shot from 22 yards around the wall in the 56th minute.

Daley got the Battery on level terms in the 65th minute, as the Hounds defense allowed the striker too much space outside of the box, and he slotted a shot into the bottom left corner of the net from distance.

Tired legs began to show as play opened up, and coach Bob Lilley made his first three changes of the game in the 78th minute. Less than a minute later, it paid off.

Jordan Dover, fresh on the field, picked out Dixon in the middle of the field, and Dixon played a diagonal pass to send Cicerone into the box for a left-footed finish, his 16th of the year. The goal gives Cicerone the third-best goal-scoring season in Hounds history, trailing only Thiago Martins’ 23 in 2003 and Rob Vincent’s 21 in 2015.

Russell Cicerone takes the honor with a goal and an assist, as he ended a mini-drought of sorts. Though he scored a penalty kick against Tampa Bay two weeks ago, the strike was his first in the run of play since Sept. 11 against Loudoun. He also had a good passing day, connecting on 19 of 27 passes (70.4 percent).

The Hounds will travel to Miami to play the USL-ordered replay of the final 24 minutes of last Saturday’s match. The Hounds will lead 1-0 when the game resumes at 7 p.m. at Riccardo Silva Stadium in Miami, and they will need a win or a Charlotte loss/tie that night against Loudoun to stay in the hunt for home field.