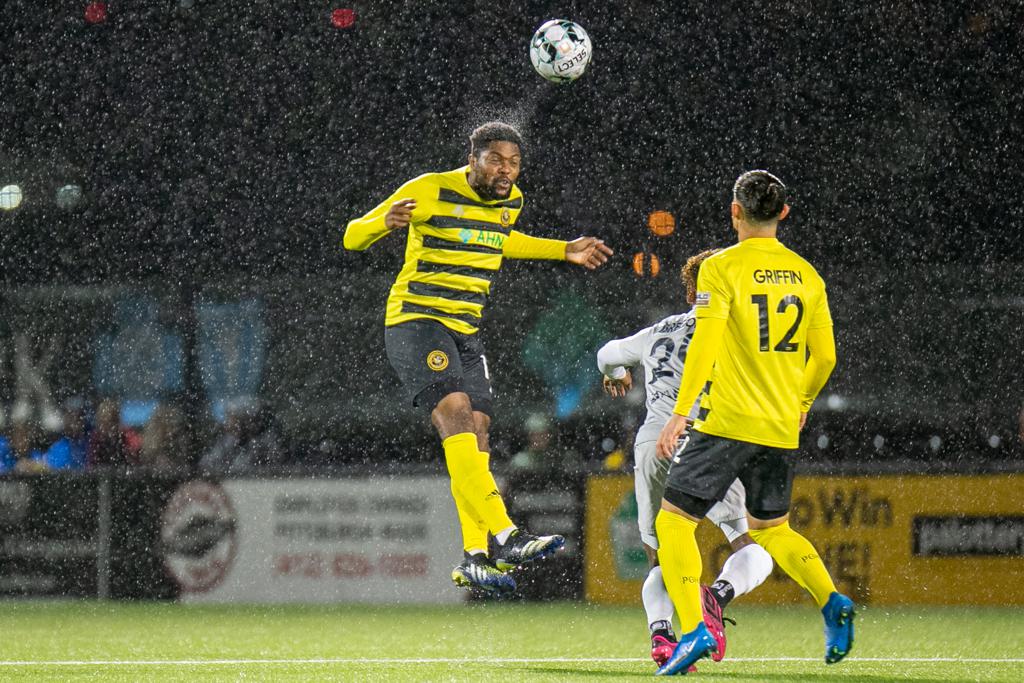 PITTSBURGH (October 30, 2021) — Pittsburgh Riverhounds SC couldn’t find a breakthrough goal and had to settle for a 0-0 draw with Hartford Athletic in their regular-season finale on a rainy Saturday night at Highmark Stadium.

The draw means the Hounds (17-8-7) finish third in the Atlantic Division and will go on the road to face Central Division runner-up Birmingham Legion FC (18-8-6) in the Eastern Conference Quarterfinals on Sunday, Nov. 7.

Danny Vitiello made three saves to record his third shutout in the past four games and ninth on the season, which will rank him among the top five in the USL Championship this season once all games are completed. The game was a chippy contest, with a total of 39 fouls called and 12 yellow cards issued.

The Hounds will lament plenty of missed opportunities in this one, recording 11 shots but only one on goal.

That trend that started in the ninth minute when Tommy Williamson’s layoff pass split the legs of a defender and sent Russell Cicerone toward goal, but his open shot from the top of the box skipped wide.

Mekeil Williams had a good headed chance from a corner in the 18th minute that went just wide, and he later recorded the team’s only shot on goal with a header.

Cicerone again had acres of space after Williamson forced a turnover, be he had a look of disbelief after missing the frame a second time just six minutes before halftime.

Vitiello ended the half with his biggest save of the night, denying a 25-yard blast by Luka Prpa with a diving stop to his right.

The Hounds struggled to make as many good chances after the break, and Hartford created its own decent chances in the game.

The visitors’ closest moment was a header in the 79th minute by Walmer Martinez, who rose to meet a long free kick and didn’t miss Vitiello’s goal by much.

The Hounds again should have had their goal in the 88th minute, when Kenardo Forbes wisely let a pass from Jordan Dover run past him to an open Anthony Velarde, but Velarde pushed his shot wide to the left of an open net from 15 yards away.

Mekeil Williams had a strong day in the center of the Hounds’ back line with two tackles, two clearances and wins on all four of his aerial duels, all while he completed 26 of 32 passes (81.3 percent), trailing only Kenardo Forbes. Williams also showed a willingness to get forward, recording three shots — tied for the team high — and the team’s only shot on goal.

The Hounds will be in the USL Championship Playoffs, presented by TwinSpires, which begin with the first matches Friday, Nov. 5. The matchup against Birmingham Legion is a rematch of the 2019 Eastern Conference Quarterfinals, which the Hounds won by a record-setting 7-0 score at Highmark Stadium. Three players who played in that game for the Hounds — Neco Brett, Thomas Vancaeyezeele and Ryan James — now play for the Legion. That game is also the last time the Hounds and Legion have met.