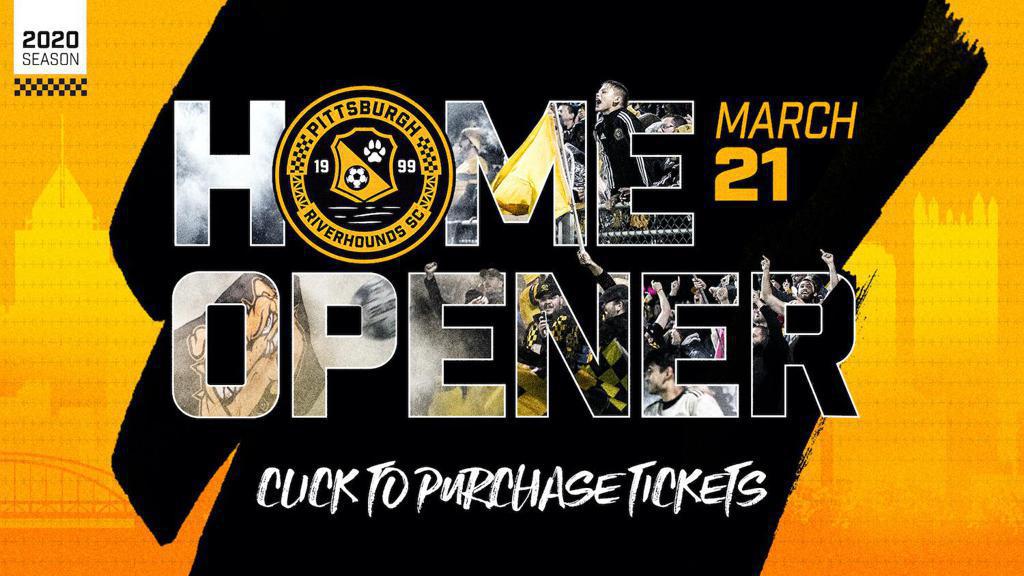 With the release of the 2020 USL Championship regular season schedule earlier this week, soccer season is right around the corner once again in the Steel City.

Fresh off of a 2019 campaign that saw Pittsburgh Riverhounds SC finish as the regular season Eastern Conference champions, the team will look to build off of that momentum during its 34-game slate this season.

Here is a look at some highlights from the 2020 Hounds schedule unveil.

The Hounds enter the final stretch of the regular season with a five-match month of August, with four of those five coming at home at Highmark Stadium.

Pittsburgh’s dominance at home has been well-documented, and it’ll take any advantage it can get down the stretch once the playoff picture comes into focus.

After heading out on the road for a tilt against Memphis 901 FC on Aug. 5, the Black and Gold return home for three straight home games, including back to back matches against a pair of playoff teams in New York Red Bulls II and Tampa Bay Rowdies.

They close out the home stand with a Saturday night showdown against Sporting Kansas City II.

Clash of the Titans

The Hounds will have one of their hardest tests of the regular season on Sept. 13 when they head out on the road for a clash at Lucas Oil Stadium against the Indy Eleven.

Fresh off a 2019 campaign that saw them finish in third place in the USL Championship Eastern Conference standings just five points behind the Riverhounds, Indy will be looking to build off that momentum during these stretch run to the 2020 playoffs.

Indy defeated the Black and Gold, 2-1, last season in their only trip to Lucas Oil Stadium.

Pittsburgh closes out its 2020 regular-season slate at home against the Charleston Battery, another playoff team from the 2019 campaign.

And while a perfect world would have the Hounds wrapping up their playoff picture well before the final game of the season, history has shown that is not always the case.

After all, it wasn’t until the final game of the 2019 campaign that the Black and Gold locked up the No. 1 overall seed in the USL Championship Eastern Conference playoffs with a win over Birmingham Legion FC.  With a 2020 season that figures to be just as competitive, it could very well come down to the final day of the season.

On The Road Again

While the Black and Gold weren’t quite as dominant on the road as they were at home in 2019, they still managed to put together a very impressive 9-4-4 mark away from Highmark Stadium, including a 2-1 road win over Loudoun on Oct. 1.

It will also mark the first matchup in club history between the Hounds and newly added Miami FC.

Riverhounds SC will once again have a home game on the Fourth of July, taking on North Carolina FC Saturday evening at Highmark Stadium.

Fans in attendance are welcome to stay after the conclusion of the game to watch the City of Pittsburgh fireworks display from the comfort and incredible vantage point of Highmark Stadium in Station Square.

The Hounds defeated Philadelphia Union II, 1-0, in a memorable showdown last year on the holiday.

The Hounds round out July against a trio of southern clubs, playing back-to-back road matches against Birmingham Legion FC and Charleston Battery before hosting Charlotte Independence at Highmark on July 25.

Pittsburgh clinched the top overall seed in last year’s USL Championship Playoffs on the last game of the regular season a year ago, a 1-0 thriller at Birmingham that saw the Black and Gold go up 1-0 with just a few minutes to play in the game.

After starting the 2020 campaign on the road at the Charlotte Independence on March 14, the Black and Gold will return to Highmark Stadium for their home opener against Louisville City FC on March 21.

The game also marks a rematch of Pittsburgh’s Eastern Conference Semifinal playoff matchup from 2019, a game that saw Louisville end the Hounds’ incredible run into the postseason with a 2-1 extra time victory back on Nov. 2.

April on the Mon

The Hounds are still riding a regular season home-unbeaten streak dating back to July 21, 2018, finishing the 2019 campaign with an unblemished 10-0-7 mark at Highmark Stadium.

They will look to carry that indomitable home form into 2020, when they play three of their four games in the month of April at home as they look to bank points and build up some momentum early on.

After hosting Birmingham Legion FC on Saturday, April 4, Pittsburgh heads out on the road for a tilt at Sporting Kansas City II the following weekend before returning back to Highmark for consecutive home games against Loudoun United FC and and Saint Louis FC on April 18 and April 25.

The Hounds will play five matches in the month of May, with three coming against teams who finished the 2019 campaign outside of the playoff picture.

While every matchup presents its own unique challenges, the Hounds faired well against their May opponents last season.