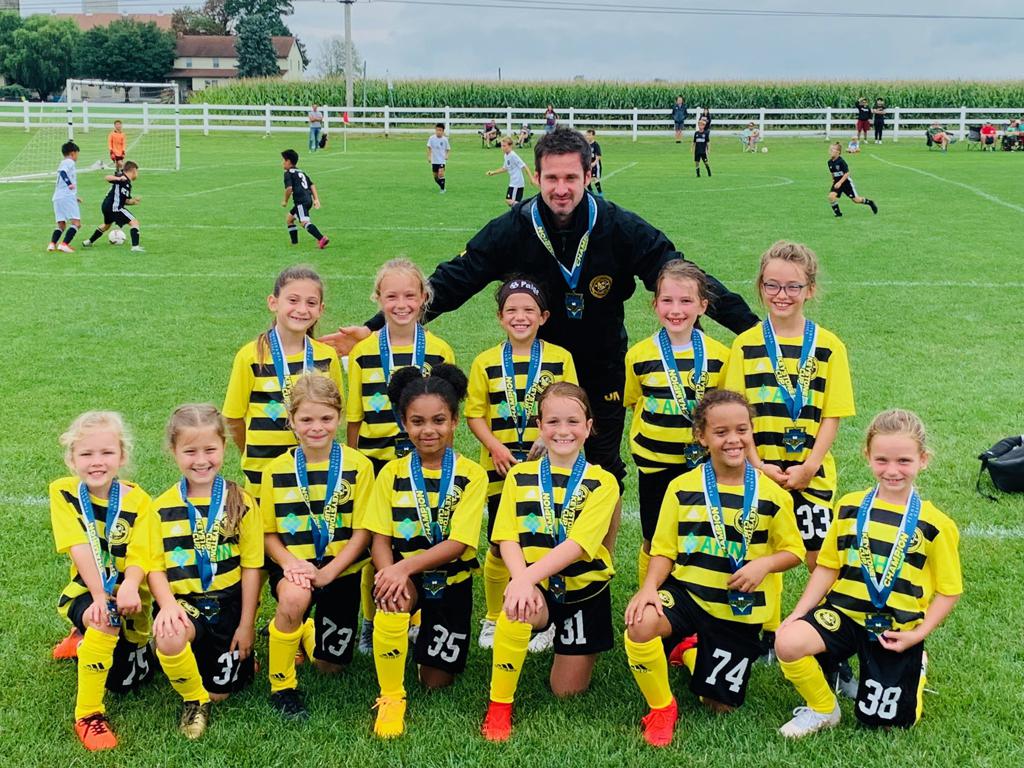 The 2013 Girls' first tournament experience was a winning won, as they took first place at the PA Classics Keystone Cup on Sunday, Sept. 5.

After a successful debut of the Pittsburgh Riverhounds Classic as the fall season lid-lifter, the Riverhounds Development Academy took its show on the road for Labor Day weekend at the annual PA Classics Keystone Cup played in and around Lancaster County, Pa.

The trip to Eastern Pa. was a triumphant one for three of our sides, as the 2013 Girls, 2011 Girls and 2008 RDA II Girls all captured their division title, while the 2013 Boys and 2012 Girls also reached the championship game in their flight.

For the 13 Girls in their first tournament outing, victory came after some back-and-forth play in a 4-3 win over Northeast Cantalao FC. The team clinched their group with a tricky 5-5 draw with Penn Fusion after cruising through Saturday’s play with big wins over PA Classics and Pittston Surge. Paige Vuckovich, Cadence Wolski and AJ Barr were just a few of the scoring contributors in a great first event for the team.

The 11 Girls are now 2-for-2 at tournaments after winning the Riverhounds Classic. The team won both of its knockout round games by 2-1 scores, topping Cedar Stars Academy (N.J.) in the semifinals and the hosts in the championship match, to rebound from dropping a match Saturday during the group stage.

The 08 RDA II Girls didn’t have a championship match but won their round-robin division with a 3-0-1 record. Miladija Pavlovich scored a hat trick in a 4-1 win over Penn FC to begin Sunday, and Molly Baker scored all three goals in a 3-0 win over FC Delco to clinch first. Olivia Mooney had a clean sheet in the clinching match, and Cianna Brokenbek and Nora Davidovich anchored the defense all weekend.

Coming close were the 13 Boys, but a slow start doomed the team in the final, a 7-4 loss to Avid Knights (Md.). Niko Barisic had a hat trick in the loss, and he and Bane Josephic paced the team’s scoring all weekend.

The 12 Girls battled through a tough semifinal with FC Delco and slipped into the final by a 3-2 score. A good Penn Fusion side claimed the title, however, stopping the Hounds 3-0 in the championship game.

For a rundown of all the weekend’s action at the Keystone Cup, don’t forget to visit the RDA Results page, where you can keep track of all the teams in action throughout the 2021-22 season.