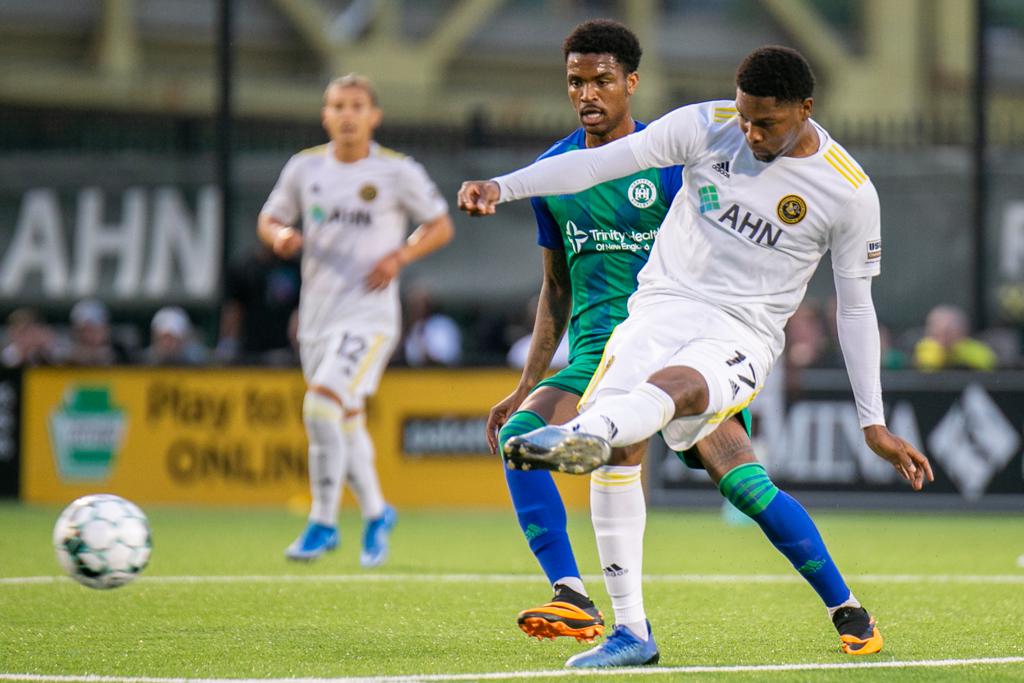 PITTSBURGH (October 29, 2021) — Pittsburgh Riverhounds SC will host its final match of the regular season when they face Hartford Athletic at 7 p.m. Saturday at Highmark Stadium. The match will be shown on 22 The Point and streamed on ESPN+.

It will be the fourth meeting of the season between the Hounds and Hartford, and the Hounds (17-8-6) have a 2-0-1 edge over the New England club in 2021. But Hartford (12-15-4) got its first-ever win over the Hounds at the end of last season to steal the division title, and this year, despite missing out on the postseason, they will look to play spoiler for the Hounds’ chances of hosting the first round of the USL Championship Playoffs.

The Hounds’ playoff math is simple. If they win and Charlotte fails to win at Austin, the playoffs will begin Nov. 6 with Memphis coming to Highmark Stadium. If the Hounds don’t get the job done or Charlotte wins, then the playoffs begin next weekend with a road trip to either Birmingham or Louisville.

The Hounds’ injury picture is unchanged, with only forwards Albert Dikwa (questionable - groin) and Josh Gatt (out - knee) remaining on the injury report. Hartford, on the other hand, lists two players as out — Nii Armah Ashitey (leg) and Carlos Merancio (knee) — and five as questionable, including defensive regulars Tulu (hip) and Thomas Janjigian (hamstring).

The Hounds big guns in attack have been good all season, but especially against Hartford. Russell Cicerone and Alex Dixon each have three goals in the three meetings this season, accounting for six of seven Hounds goals against Hartford.

Also of note is the league’s assists race, both for the season and all-time. Hartford midfielder Danny Barrera is in line to take the 2021 crown with 12 assists this season, and his prodigious pace now has him second in USL Championship history with 44 during his time in the league — one behind Hounds midfielder Kenardo Forbes’ total of 45.

Saturday will also be Fan Appreciation Night at Highmark Stadium, with giveaways and raffles throughout the game.

The Tailgate Zone will be buzzing again under the lights with food from Progression Bistro and The Sandwich Guy, along with beer and non-alcoholic drinks on sale. Fans can purchase a reusable, 22-ounce commemorative Straub mug of Riverhounds Session Copper Amber Lager for $12, and they can bring the mug back later to get it refilled for only $7 — the same price as a regular, 16-ounce pour.

Tickets for the match are still available through Ticketmaster or at the Highmark Stadium Box Office. The special code “DOVER” can be used in Ticketmaster for a discount of up to 30% off selected seats, while the $18 Tailgate Zone supporters section tickets, which include the cost of a first drink in the zone, are also available.